The history of the brussels' trolleybus service.

So, line 54 was opened at 18th april 1939 between Forest and place du Luxembourg, and a little bit more of one month later this line reached the centre of Machelen.  At this occasion, the line got a special ticketing, that appeared later by the other suburban lines.

At the end of 1939 a limited service was opened to intensify the service : 54 barré Avenue Rogier – Luxembourg – Place Albert.

In 1940  the war broke up. The different restrictions set by the german authorities brought the line into success. But logically the service conditions were still more difficult, principally due to the lack maintenance of the installations and to the tyres shortage, and -at the end of the war- to the progressive come back of the buses too. The trolleybus road wasn't saved during the war, especially the northern part of the line (where the line goes near the mostly bombed marshalling yard of Schaerbeek). A vehicle was totally destroyed by a fire after an explosion in Haren. Round 1945, only two vehicles rode on the limited line, that was temporarly extended to Forest. Normal situation will come back after the end of the restrictions, when it was possible to create a new stock of pieces. After the war, the line had an unfailed success. For this reason, the limited line was extended to the Saint-Vincent Church in Evere in 1952.

But after the war, the times became difficult for the trolleybus line : the technical evolution by the other transports systems was really important. PCC-tram appeared on the brussels' net and the bus was in the 50's an economical most interesting alternative to the trolleybus. Time after time, the maintenance and service costs of the line were still bigger and the vehicles were older. And the growth of the traffic will create difficult traffic conditions for the trolleybuses in the narrow streets of Ixelles. A first solution was found to this problem : the road modification in 1956, between place Fernand Cocq and rue de Dublin, over the rue du Conseil, rue Sans-Souci and rue de la Longue Vie, to Machelen. 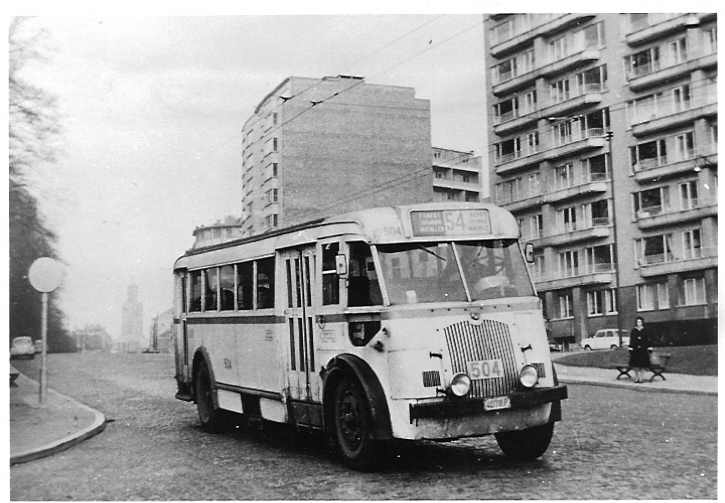 A Brossel AB6DS bus at the beginning of the avenue Victor Rousseau slope, next to avenue du Domaine. These vehicles rode on the line to replace defected trolleybuses. Bus 504 on this picture still exists today, it's present in the collections of the MTUB.

Inexorably the destiny of the brussels trolleybus seems to be mapped out : round 1960, Brossel AB6DS buses began to ride on the line, together with the trolleybuses. Defects and repairs were still more numerous, that was the indication of the wear of the trolleybuses, till the last moment. In fact, completely weared trolleybuses were definitively replaced by buses at 14th february 1964.

limited service in the beginning of the service, 1939

complete line with red numbers (to indicate a special tarification), may 1939

limited service of 1952.  The word 'Eglise/Kerk' (Church) was replaced by 'Place/Plein' (Place) a short time later

For turning back to the garage, the trolleybuses have the following indicators :

In the beginning of the service

There was indicators for special occasions too :

turn back to the garage, round 1958, notice the white colour where the destinations are indicated

occasional indication, round 1955, for celebrations or markets. On paper.

And the lateral indicators :

first variante (in limited service too)