Trolleybus : this original vehicle seems to be a perfect hybridal mix between a tram and a bus. It works with the power system of the first one and is flexible as the second one. In fact, this vehicle is not prisonner of the rails and follows a trolley wire. The rails that are normally the negative pole are replaced by a second trolley wire. 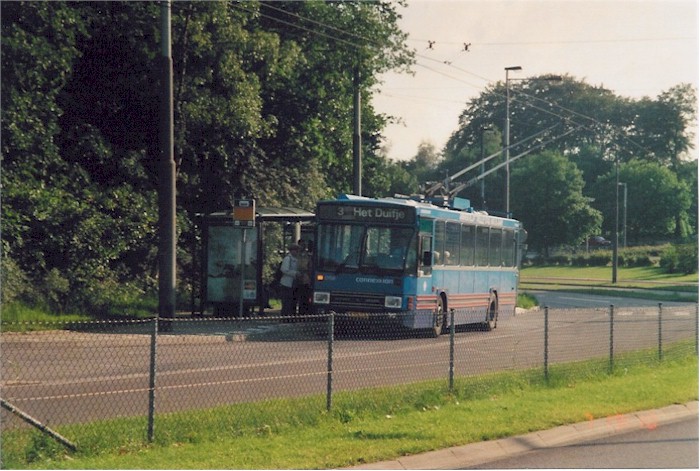 This is an actual trolleybus vehicle. The most commons vehicles are actually only adapted bus types: characteristicals of a bus, power system of a tram. At Arnhem youth hostel rides trolley B7900T 0156 on line 3 to Het Duifje, 7 june 2000.

This kind of vehicle is already quite old. It appeared in 1882, when a vehicle created by Werner von Siemens was set in operation on a 500 meter track in Halensee in the suburbs of Berlin. This vehicle was similar to the horse drawn vehicles, but it was drawn by a contact slide riding on a double trolley wire. It was called "Oberleitungsomnibus" (omnibus (powered through a) trolley wire).

This vehicle never reached the expected success, The synchronization of the slide's movement (pick up of the power) with the vehicle's movement was its only default. So it was hard to go in competition with the tram because it was impossible for this vehicle to hide the deformations of the road. 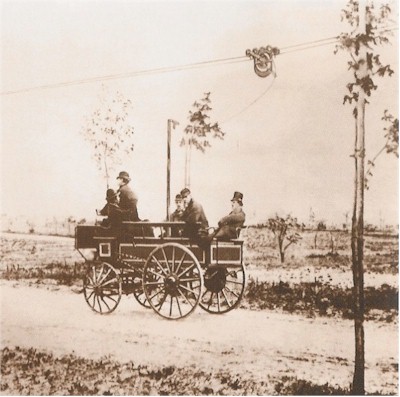 On this picture we can see the Werner von Siemens' vehicle, that rode in Berlin in 1882.

This problem will only be solved in 1900 by french engineer Lombard-Gérin, who conceived an automotive slide synchronized to the vehicle. After a trial periode on a 900 meter track on the quai d’Issy-les-Moulineaux in Paris, their vehicle became one of the attractions of the universal exhibition of Paris in 1900. This has for consequence that the system was developed in France, but without success. Other researches were processed in Germany, notably by  Max Schiemann, who used a trolley pole. The first comercial line with success was opened in Switzerland in 1901. It was called the ‘Bielathal Motorbahn’.

And we won't forget the italian Cantono-Frigerio system, who brought a still growing success for this system in this country.

The vehicle knew other evolutions who were reliable to the technical evolution of the buses (motors, tyres...) and to the power system of the trams, except the pantograph.

The expansion of the trolleybus took place after the First World War. In a lot of places it was easier to open a trolleybus line instead of renew the rails damaged by the war.  Next to it, the flexibility of this transport system was a convincing argument in front of a still growing traffic density.