The trolleybus in Brussels

The idea of a trolleybus service in Brussels appeared during the 30's. Round 1936, the S.A. les Tramways Bruxellois decided to create a new line between the centre of Forest (in the south west of Brussels) and the place du Luxembourg (such a project of line was already mentioned in the beginning of the 30's). Once the road was defined, the problem of which kind of transport mode to use appeared. Some difficulties were present on a hard and winding road. We could find on this road a narrow bridge, at Forest-Est station, a 8% slope between the centre and the top of Forest, and a lot of narrow streets in the centre of Ixelles. So, it was essential to use a flexible, powerful, economical and easy to run mode of transportation. So flexible is not the tram, the option of a tram service was fast forgotten. A bus on this line should have used a powerful motor to climb the slope in Forest, but such a motor was not economical for the rest of the road. So it has been decided to use the trolleybus. This decision was so easy motivated by the use of "national" energy to power the vehicle.

Trolleybus 6002 is arriving on place du Luxembourg, in april 1939. This vehicle was one of the 7 trolleybuses delivered for the opening of the line. On this picture we can see it still in its original configuration.

The request of the line got the different authorizations. The project was approved by the provincial authorities at 23rd march 1938. Trolley wires were installed during the second semester of 1938 and the line opened at 18th april 1939 with the following line indication : 54 barré FOREST – PL. JANSON – LUXEMBOURG.

'Les Tramways Bruxellois' decided to extend the trolleybus service on the still to be created line place du Luxembourg – Haren – Machelen.  This line was considered as an extension of the first one. The provincial authorities approved the project of this line one month later. Trolley wires were installed in direction Machelen in the beginning of 1939 and the extension to Machelen was opened at 30th march of the same year. 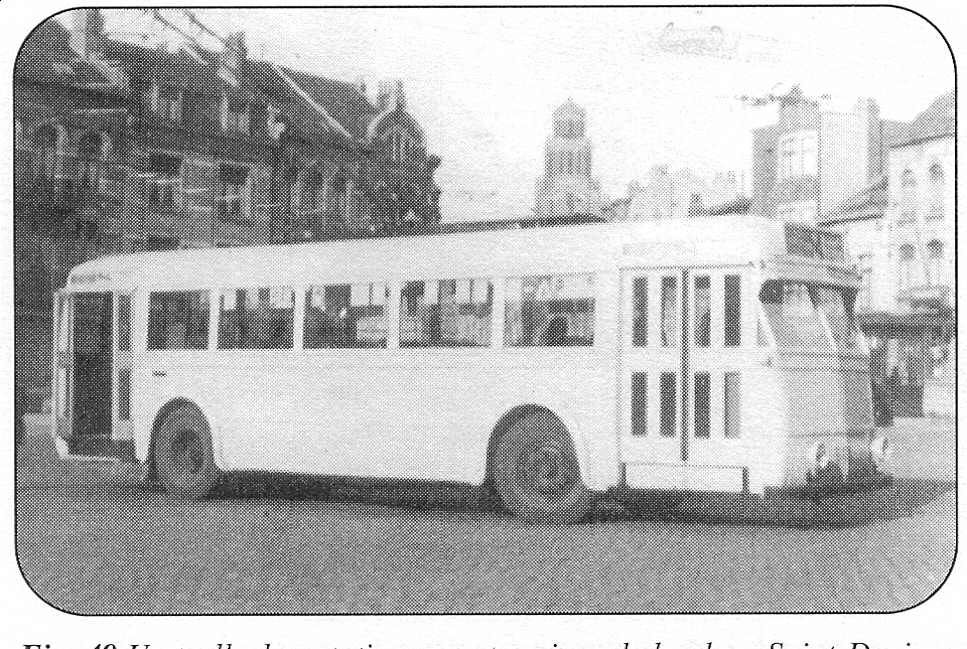 A second serie trolleybus is waiting at its terminus place Saint-Denis in Forest. These vehicles were in service a short time after the first ones. Some differences are already present.